The Dress Code in Golf, Good or Bad?

The Dress Code in Golf, Good or Bad?

The Dress Code in Golf, Good or Bad? is a short Blog addressing the question of clothing rules. That brings to mind The Clash song, Should I stay or should I go?

Many moons ago, the game of golf was classed as the gentleman’s game.
They would dress in their Sunday best to go for a round of golf.
It was very much a game that was only for the elite at the top of the social ladder. 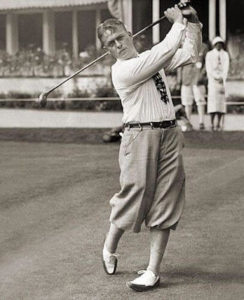 My Dress Code over the years.

Personally, I was brought up on Templenewsam municipal golf course. I never had to wear a collar, trousers, golf shoes etc.
I was free to wear what I felt comfortable in. In the 80s kids wore tracksuits or shell suits. Dayglo socks and trainers with multi-coloured laces.
We would also use the multi-coloured balls from Ping, both on the course to play with or to use as gear stick knobs.

My golf improved and I became a member of Templenewsam Golf Club. I bought a pair of Stylo golf shoes and a new club logo shirt with a stiff collar.
It wasn’t long before I felt more comfortable in a pair of Jeans rather than in shorts or tracksuit bottoms.
I was eventually picked to play for the junior team and it was here where we were told to wear our team uniforms.

It felt good to play as a team member. We all had to wear trousers, a collared shirt, golf shoes with spikes.
I felt as though I was playing better because I was holding my posture better. I felt good, proud to represent something.
On becoming the Junior Team Captain of the club I felt that I had to make a good example to others, almost like a school prefect.

Since that day I have never worn jeans or a t-shirt on a golf course.
I, now, feel terrible, embarrassed to be seen in anything other than, what I call, true golfing attire.

The times are changing and I believe that some of the barriers are slowly coming down.

A golfing Dress Code should be up to each individual player unless they are representing a Team or a Club.
I still believe in a Team Uniform as it helps to distinguish the different sides. Take the Ryder Cup or the Solheim Cup for example.
A few good friends of mine were discussing the idea of only having a Golf Dress Code during competition and no dress Code for casual play. That’s maybe a thought.

But the times are changing and fashion giants like Nike & Puma are playing a huge role in the future of golfing fashion.
When Tiger Woods came on to the scene, in the 90s, and started to wear the non-collared shirts, that went on to be called “Mock” neck shirts, it was a huge change.

Now we have a new breed of player on the Tour. The likes of Ian Poulter, Ricky Fowler and Erik van Rooyen have taken on the Golf fashion war! 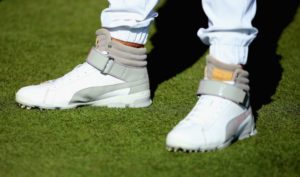 Is this the new look? Would you wear these on the course?

Check out the following links for some of the new fashion to display on the links.

Loudmouth has some jazzy designs and so do Royal and Awesome.

What do you think about the Dress Code in Golf? Where is it going?