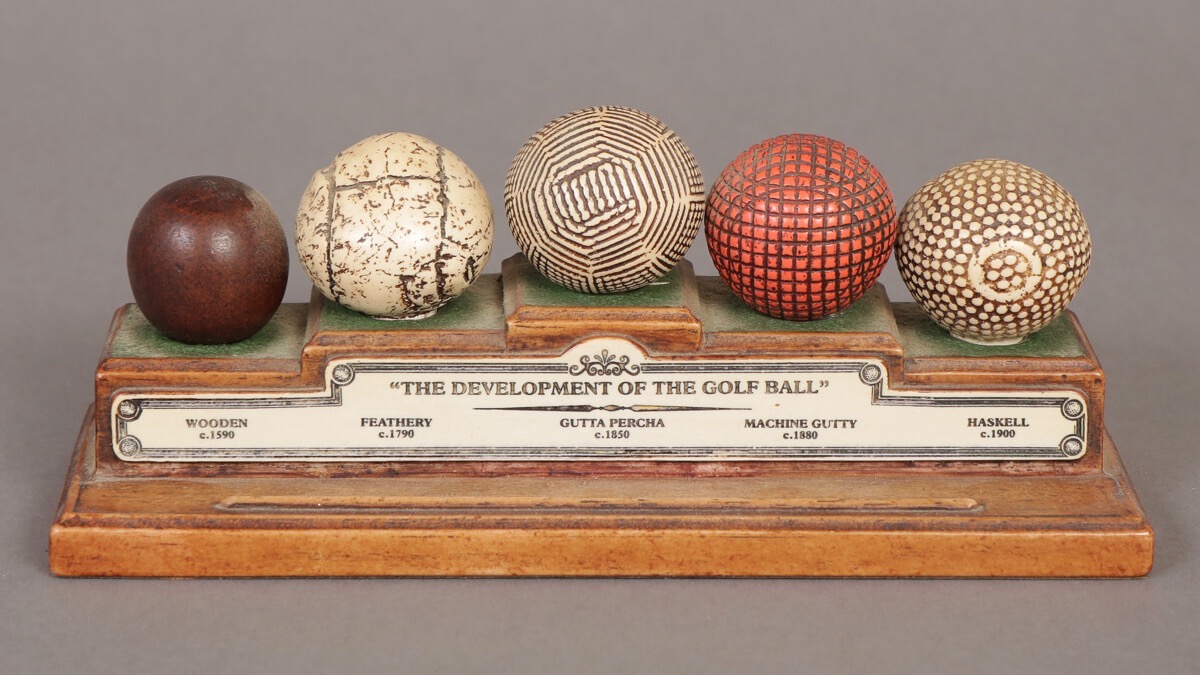 What a load of balls! is a short golf blog post that supplies you with some amazing facts and figures about golf balls.

A short history of the golf ball.

The original golf balls were made from various materials including Beechwood and other hardwoods.

In 1452, the first written evidence of an official sale of golf balls.

Featherie golf balls made from goose feathers and leather became popular in 1618.

The Featherie stayed around for a long time. In fact up to the mid 19th century. They were, however, very expensive as a ball maker would make around 4 balls per day. Their performance was excellent when dry but terrible when wet.
Also, the process involved in making a Featherie meant that many ball makers died at an early age due to the inhalation of feathers.

In 1899, the first Rubber Wound golf ball was created. It was the first ball to have dimples and it flew 20 yards further than the Gutta Percha.
In 1901 the Haskell Golf Ball Company was founded and the real industry of making golf balls began.

It wasn’t until 1960 that the Modern Golf Ball (Barsch Ball), with a solid core, appeared on the market.
By 1963, the Bartsch ball had serious competition from the likes of Spalding with the UniCore ball. Ram had also started to create a ball using Du-Pont Surlyn resin cover.
But it was in 1972 that Spalding won the battle when they introduced the so-called “ball of the future”, the Spalding Top-Flite.

Every year, an average of 125,000 golf balls are hit into the water surrounding the famous 17th hole on the Stadium Course at TPC Sawgrass.

Whilst searching for the Loch Ness monster in Scotland, scientists found over 100,000 golf balls in the loch. The strange thing is, there are no golf courses nearby.

Every year, 300 million golf balls are lost on golf courses. It is not surprising that the modern golf ball market is estimated at over 1.2 billion dollars.

Over 500 million dollars are spent each year on the Research & Development of golf balls.

The longest (legal) ball on the market is the Titleist Velocity.

The longest (Illegal) ball on the market is the Polara Ultimate Straight.

Ryan Winther, from America recorded the fastest ball speed ever with 235.1mph / 378.35kmph.

According to NASA, In 2004 Michael Lopez-Alegria (Russian astronaut) hit a golf ball with a 6 iron whilst tied to the International Space Station. Scientists calculated the ball flight being close to 1 million miles before disintegrating into Earth’s atmosphere.

Make sure you have enough golf balls on the golf course! Tiger Woods almost ran out of balls in the 2000 US Open. He won the event by 15 shots but did you know that he only had two balls left when he reached the 72nd hole.
Tiger had been putting in his hotel room and accidentally left 3 balls behind. On the course, he gave away a few balls to some of his young fans.
He teed up on the 18th hole of the final round and hit his first ball into the water and at the time he had no idea that he was now down to his last ball.
Steve Williams knew the situation and asked Tiger to hit an iron for his next shot to be on the safe side. Tiger disagreed and kept the driver in his hand. Thankfully he hit the fairway and went on to win the tournament by a huge amount.
It was only after the round that Steve told Tiger the real story.

What are your thoughts on What a load of balls!?