What is a Launch Monitor?

What is a Launch Monitor? 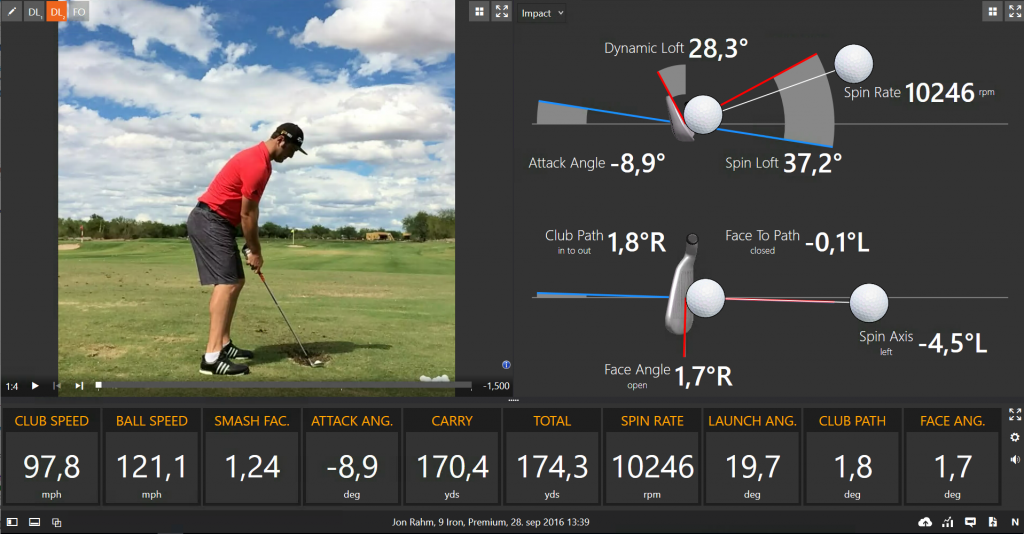 What is a Launch Monitor? This is a question that I hear quite often from many amateur golfers.
A Launch Monitor is a small box that sits behind the player’s intended ball-to-target line. At impact, the monitor is able to measure the impact and ball flight parameters.
It then gives you a graphic of the ball flight and lots of numbers relating to the shot.
It can be a great training tool, yet it can also be quite confusing for many players.

What are the numbers that are on the screen and what do they mean?

Spin Rate –
This is, simply, the amount of spin on the ball immediately after the impact. Spin will influence your ball flight, especially in the wind. The more loft, the higher the Spin Rate.

Launch Angle –
The angle that the ball takes off in relation to the ground. This will also have an effect on the length and height of the ball flight.

Ball Speed –
The Ball Speed is the speed of the ball when it leaves the clubface. Slice, Hook & High Spin can reduce the Ball Speed.

Club Speed –
This relates to the speed of the clubhead just before impact. The higher the clubhead speed, the further the ball will travel (with a good impact).

Club Path –
The Club Path is the direction the clubhead travels (right or left of target) through impact. The Launch Monitor will tell you if your swing path was in-to-out or out-to-in. This figure should be as close to zero as possible when practising a straight shot.

Face Angle –
The direction of the clubface at impact, which is either right or left of the target. Otherwise known as an open, closed or square clubface. Again, this figure should be as close to zero when practising a straight shot.

Tour Average against my Average

The average numbers on the PGA Tour are, not surprisingly, higher than mine. As a non-playing, PGA Professional my averages are lower as a result of, a lack of practice, a lack of power, a lack of exercise. I do believe, however, that if I hit the gym 3 – 4 times a week, completed regular drills to increase my speed, had a full-time coach and hit a few hundred balls per day then my averages would increase.

So, I am guessing that you might want to know my average numbers. (Believe me, they are average)
Below, you will find my numbers for a Driver & 7 Iron.

It is great to practice with a Launch Monitor to finally find your numbers. Some players, however, can find it a little disappointing, as it only tells you the truth.
Golfers are well known for exaggerating their distances, “I can hit a 7 iron over 160 yards!” said Billy (26 H/Cap) “Yes but only downhill, downwind” his partner replies.

Many players will find huge, unusual, gaps in their numbers which can be explained. It may be that you have a favourite club in your bag or a least favourite club in your bag. It may also be that you are missing a club in your set. If you have 12 clubs in your bag and you have a huge gap between your 5 iron and your 5 wood, you may want to think about buying a hybrid/rescue club to fill the gap.
A Launch Monitor is also a handy tool if your thinking about custom fitting your new set of clubs. It can answer the question of, Should I buy a new set of irons with steel shafts or graphite shafts.
You can also try out the latest Driver, on the market, and compare modern technology against your old existing Driver.

What are the most popular Launch Monitors and what do they cost?

There are lots of different Launch Monitors on the market, The more popular models are:
Trackman 4, Flightscope X3, Flightscope Mevo, SkyTrak or even the ES12.
The ES12 is not comparable with the technology of other Launch Monitors but it will be enough to give most golfers a taste of the modern world.

Whatever you decide to do, the technology is out there waiting for you.

What did you think of Launch Monitors?
Have you tried one?
Do you use one frequently?

Please leave your comments on my contact page.
Read more of my Blogs here.