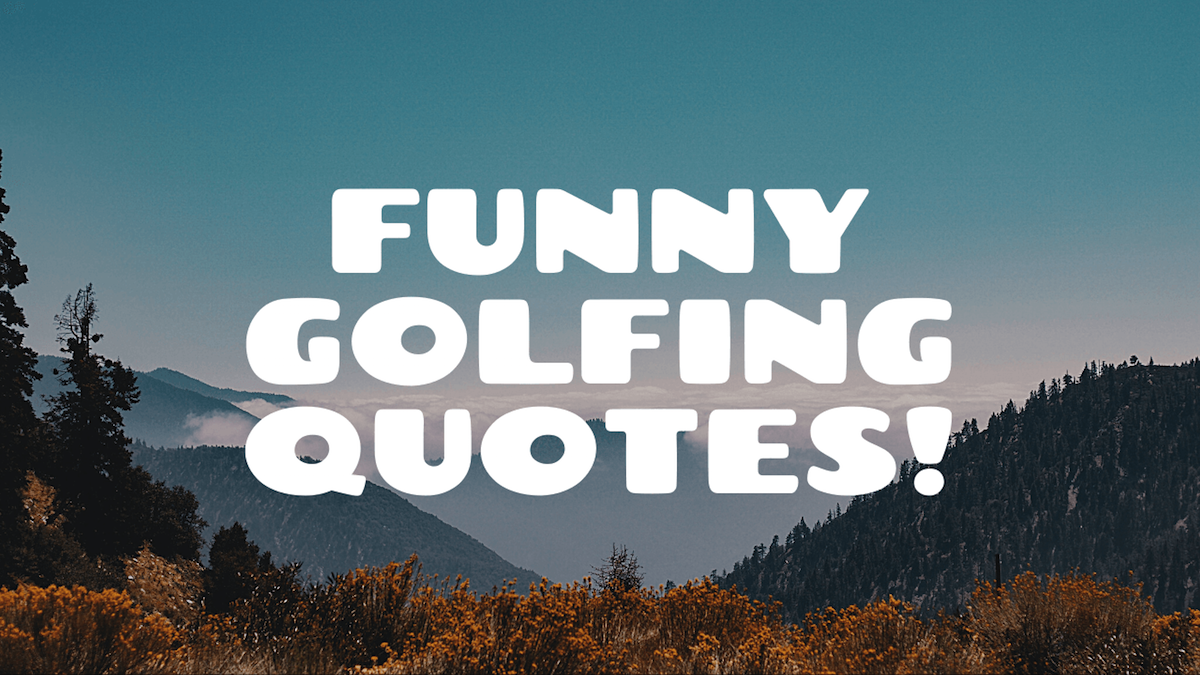 Funny Golfing quotes is a short Golf blog post that highlights some of the most famous and funniest quotes in Golf.

I am not that keen on a golfing joke but I do love quotes, especially funny golfing quotes.

I think that the first quote that I ever heard was from David Bulmer, my local PGA Professional. We were collecting balls on the range when one ball dribbled past us. I asked David if we should move out of the way as someone was on the range hitting balls. He replied, “Don’t worry about him, He can’t hit a cows’ arse with a banjo!”

Since that day I have loved every little phrase that I have heard on the golf course or in the clubhouse.

Quotes raise their heads as spontaneous moments in interviews or even during commentary.

They are phrases that just pop out of peoples mouths at the perfect moment.

So I have made a list of my favourites below. The first few from famous Professionals and the others from Amateurs.

“I have a tip that can take five strokes off anyone’s game: It’s called an eraser.” – Arnold Palmer

“Golf is a puzzle without an answer. I’ve played the game for 50 years and I still haven’t the slightest idea of how to play.” – Gary Player

“Golf and sex are about the only things you can enjoy without being good at.” – Jimmy Demaret

“The woods are full of long drivers.” – Harvey Penick

“If a lot of people gripped a knife and fork as poorly as they do a golf club, they’d starve to death.” – Sam Snead

“I don’t say my golf game is bad, but if I grew tomatoes, they’d come up sliced.” – Arnold Palmer

On Jim Furyk’s swing – “It looks like a one-armed man trying to wrestle a snake in a phone booth.” – David Feherty

“That ball is so far left, Lassie couldn’t find it even if it was wrapped in bacon.” – David Feherty

“The reason a pro tells you to keep your head down is so you can’t see him laughing.” – Phyllis Dillar

“I know I am getting better at golf because I am hitting fewer spectators.” – Gerald R. Ford

“The difference in golf and government is that in golf you can’t improve your lie.” – George Deukmejian

“Don’t attempt to drown yourself in the lake, because you can’t keep your head down that long.”

My all-time favourite quote was from Alfie Dobson, an old experienced golfer. He was 80 plus years old and had a fine-tuned, yet somewhat shorter, swing. He still played comfortably to single figures although he couldn’t hit the ball more than 160 yards. He could predict shots before they happened. Alfie would tell you what was going to happen to his ball before he hit it.

He was playing the club championships one year and after every shot, as always, he said “Tut, Told you” Then on the 18th tee he teed up his ball and said, “I hate this tee shot, I hit that Oaktree every time” he then turned to me and said, “If I hit that Oaktree today, I will cut it down”. He hit his ball, which flew towards the Oaktree. The ball hit the tree and I looked at Alfie and Alfie picked up his tee and walked towards his bag without saying a word. This was the first time that I had ever seen Alfie hit a ball without saying “Tut, Told you” afterwards.

The club championships was a 36 hole tournament and the next day Alfie reached the 18th tee. But something was different! The large Oak tree was gone. Alfie never said a word. He hit his ball that landed on the fairway for the first time ever. We reached the spot where the tree once stood. There among the piles of sawdust was the tree stump. Etched in the tree stump were the words, “Tut, Told you”! I fell to the floor in tears of laughter. That was still the funniest moment in my golfing career.

What do you think of this blog post, Funny Golfing Quotes?

Have you got a favourite quote that is not on my list? Maybe you know an Alfie story?